Inducted Into Bonner Hall Of Fame 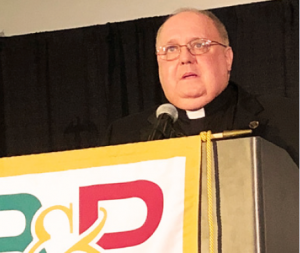 On October 27, 2018, Father Dennis Weber, SdC was inducted into the Monsignor Bonner High School Hall of Fame. Father Weber is a graduate of the Class of 1972. A record crowd of 725 people filled the Drexelbrook Grand Ballroom to capacity to honor eleven new inductees, who are now numbered among the 120 individuals to have received this honor over the last thirty years. To be considered by the nominating committee, one should be known to have made a significant contribution to the school, community and/or society in general in areas as diverse as the arts, business, coaching, education, government, law, medicine, the military, politics, religion, science, sports or other endeavors. In receiving his award, Father Dennis acknowledged his nervousness but quickly began to beam as he shared his award with the men to whom he has ministered at Don Guanella over many years of service. Calling out the names of those men in attendance and asking them to stand, Fr. Dennis invited a round of applause from the audience to honor them. Father spoke from the heart about the right to life of all people, and cited the tragically high number of children today diagnosed in the womb with intellectual disabilities who are aborted. A member of the Servants of Charity founded by St. Louis Guanella, Fr. Dennis was ordained in 1997. Monsignor Bonner High School boasts nearly 20,000 graduates since 1957, so to be named one of just 120 Hall of Fame members is quite an honor. Those who have been touched by Father Dennis and his kind and loving ministry to the individuals and families of the Communities of Don Guanella and Divine Providence know that it is a well deserved honor.